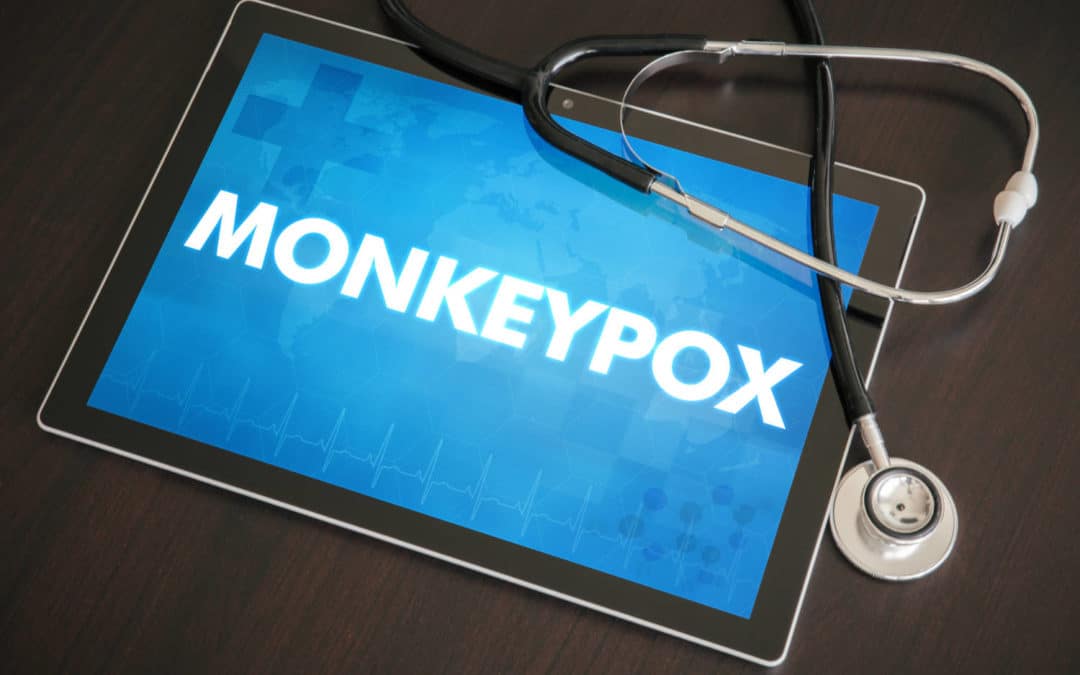 Two cases of monkeypox have been recorded in the UK. It is the first time the rare and potentially life-threatening infection has been diagnosed on our shores. Both patients are believed to have caught the infection in Nigeria before travelling to the UK.
The first case was diagnosed in Cornwall, the second in Blackpool. Both patients are being treated in specialist infectious disease units in separate hospitals. There is no known link between the two cases.

What is monkeypox?
Monkeypox is a rare zoonosis – a disease transmitted to humans from animals. It is caused by the monkeypox virus and is part of the smallpox and chickenpox family.
When was it first identified?
Monkeypox – the timeline:
1958 – discovery of the virus in 1958 among monkeys in a laboratory.
1970 – identification of the first cases in humans in the Democratic Republic of the Congo in 1970.
2003 – an outbreak of monkeypox occurred in the USA. linked to rodents from Gambia being sold in a pet shop. Of the 71 reported cases, none were fatal.
2017 – Nigeria experienced a large outbreak of monkeypox with occasional cases since.
2018 – two cases reported in quick succession in UK. Both people infected had recently travelled to Nigeria.

How do you catch it?
There are two known methods of transmission. One is via humans and one is via animals.

How do you catch it from animals?
Spread is through handling infected monkeys, squirrels and Gambian giant rats. This means direct contact with blood, bodily fluids or skin lesions of an infected animal. Rodents are considered the most likely source of the virus.
Another possible risk factor is eating meat from infected animals that haven’t been cooked sufficiently.

How do you catch it from humans?
It can spread when someone is in close physical contact with an infected person and they touch the skin lesions. Or they touch objects recently contaminated by the patient.

Good to know?
Pregnant women should take note, transmission can also occur through the placenta. This is known as congenital monkeypox.

How contagious is it?
Public Health England states monkeypox does not spread easily between people so the risk of it affecting the wider population is low.

How serious is it?
In most cases monkeypox is mild and resolves on its own with the patient recovering within a couple of weeks. It doesn’t have lasting effects on the patient’s long term health, although if the rash spreads to the eyes it can cause blindness.
However in some cases it can cause severe illness. This is due to age, the patient’s overall health, extent of exposure to the virus and the severity of the complications.
According to the Centre for Disease Control and Prevention in the US, as many as one in ten cases of monkeypox in Africa result in death. Most deaths occur in the younger age groups.

Where is it reported?
Mainly in remote parts of central and west African countries, near tropical rainforests.

What are the symptoms of monkeypox?
Monkeypox starts with fever, aching muscles, headache, backache, swollen lymph nodes, chills and exhaustion.
Within 1-5 days of getting the fever, a painful rash appears and open sores develop. These usually start on the face before spreading to the rest of the body. They scab over and then fall off.

Available treatment?
There are no known treatments or vaccines. The smallpox vaccination had 85% success rate in preventing monkeypox. However since smallpox the eradication of smallpox, the vaccine is no longer available.

What is the NHS doing to combat monkeypox?
The NHS is using robust infection control procedures for dealing with these current cases to minimise the risk of an outbreak.
As a precaution the NHS are contacting fellow passengers on the flight with the infected patient, to ensure they are treated swiftly if they start to show the symptoms of monkeypox.

First Aid for Life is a fully regulated first aid training provider whose trainers are highly experienced health and emergency services professionals. We specialise in first aid training for schools and offer a full range of courses suitable for staff, parents and pupils. In addition to first aid training, we help schools fulfil all their first aid requirements.