Going behind the scenes at London’s Air Ambulance Charity 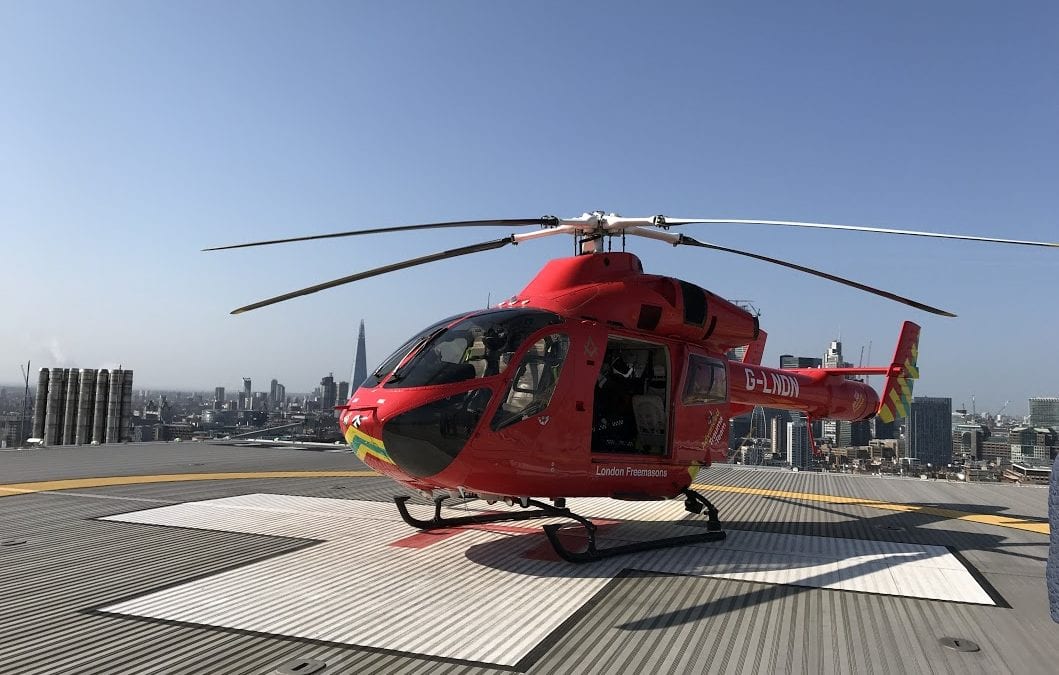 I was privileged to be invited to the headquarters of London’s Air Ambulance Charity at the Royal London Hospital as a freeman of the Guild of Nurses. 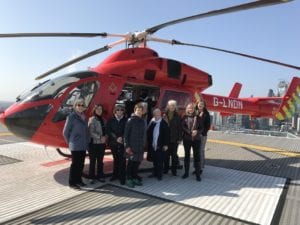 By the time we arrived at 11am the crew of the air ambulance had already been called out three times – to a cyclist, to a child hit by a car and to an accident on a construction site. It was just a typical day for this hard-working charity. Working 24 hours a day, serving the 10 million people within the boundaries of the M25, the team of London’s Air Ambulance Charity has saved thousands of lives. 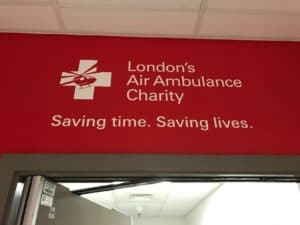 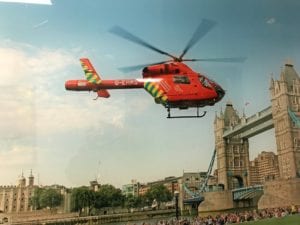 Most of us have seen the bright red helicopter whizzing overhead to treat and rescue seriously hurt casualties in medical emergencies. Therefore, it was fascinating to meet the people behind these rescues and learn more about the skills, expertise and logistics involved.

London’s Air Ambulance Charity crew are all based at The Royal London Hospital in Whitechapel, east London. The service operates in partnership with the NHS through Barts Health NHS Trust and London Ambulance Service, but as a charity is mostly funded by donations, which enables it to operate with a degree of independence from the NHS, enabling it to push the boundaries of pre-hospital emergency medicine. 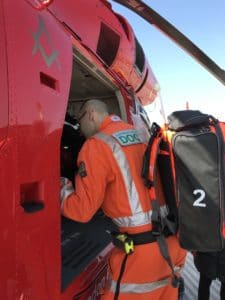 Leading the way in trauma healthcare

This degree of independence from the NHS enables it to push the boundaries of pre-hospital emergency medicine and lead the way in trauma healthcare worldwide. 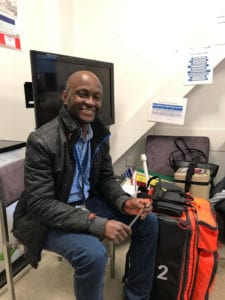 They frequently publish papers on their findings and working within their team is one of the most sought-after jobs for medics and paramedics. Furthermore, they have specialist doctors from all over the world, coming to learn and contribute to this expertise. 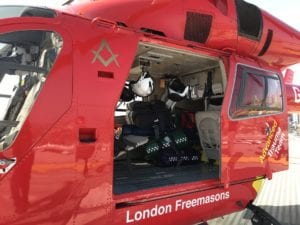 The helicopter operates from 0800 to sunset throughout the year and cars by night, to deliver the advanced trauma team that provides roadside care to critically injured patients. 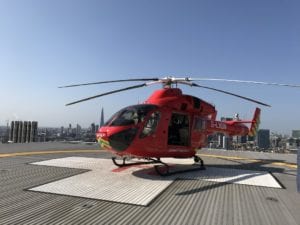 The helicopter pad has its own designated team of firefighters who are on standby at the Royal London Hospital in case of any fire scare. In fact, these firefighters are some of the longest-serving members of the team. 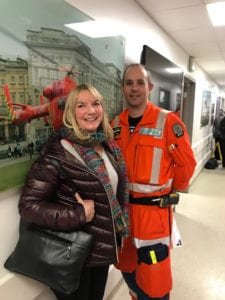 Each crew consists of one doctor, one consultant and a paramedic (seconded from the Ambulance Service on a prestigious 12-month placement). Once they arrive on-site, they work closely with the other emergency services professionals to do their very best for the casualty. 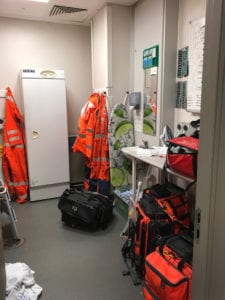 Fly in, drive out

Interestingly, they rarely transport patients to hospital in the helicopter, it is all about getting the crew to the incident as fast as possible. In fact, most casualties are then transported to the most appropriate hospital unit by road. 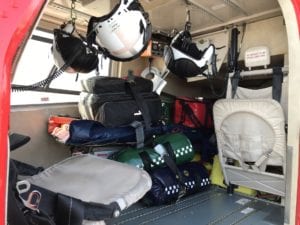 What kit do they carry?

The helicopter contain most elements you would find within an A&E department – and more. They carry units of O negative blood and everything needed to give the casualty the very best chance of on-scene survival.

They have developed a pioneering balloon procedure – known as REBOA (C) – where they insert a canula into the femoral artery and up into the lower aorta, here they inflate it to cut off all the blood supply below this level. Through this they have been able to save people with catastrophic bleeding from a pelvis, who previously would have died.

They are also shortly to be able to start using Extracorporeal membrane oxygenation (ECMO), also known as extracorporeal life support (ECLS), a way of providing prolonged external cardiac and respiratory support to someone whose heart and lungs are unable to function sufficiently to provide an adequate amount of gas exchange or perfusion to sustain life.

State of the art techniques

In addition, in time they will be able to chill people at the roadside. Slowing down the metabolic needs, protecting their organs, preventing brain damage and potentially saving even more people in some of the most extreme situations. 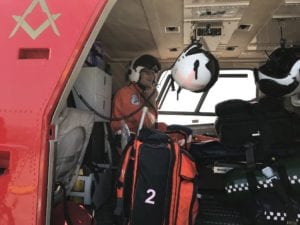 Every operation is a learning experience and an opportunity to further learn and improve for next time. Each time the team return from a mission, they instantly restock and check the kit and then group for a hot debrief. They go through the minutiae of each event and see when something went well, why it was good, and if something could have gone better to ensure they learn for next time. Later they will also meet to discuss the events in even more detail, looking further at the progress of the patients and how their intervention has impacted upon the patient’s recovery and prognosis.

Pre-hospital medicine is fast paced and spontaneous, all outcomes can be learnt from. 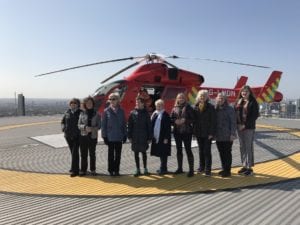 Sadly, not all missions are successful, and the team receive reviews following post mortems to ensure they continue to learn and see if in hindsight there would have been anything further they could have done – for the benefit of future casualties.

Following up with patients

Frank is the Patient Liaison Officer – he is a highly qualified A&E nurse and integral member of the team. In addition, he is responsible for following up all patients who have been treated by London’s Air Ambulance Charity crew.

Casualties unaware they’ve been treated by the LAA crew

Frank’s role is pivotal to their ongoing research and the innate sense of caring from the whole team. Many of the casualties are unaware that they were treated at the scene by one of London’s Air Ambulance Charity crew. Frank liaises with the patients, offer them ongoing support, referring them to relevant rehabilitation units and linking them to other patients for peer to peer support – particularly when they have experienced life-changing injuries. 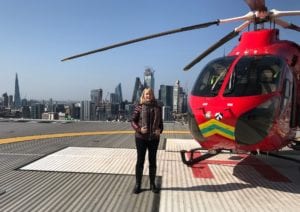 Their stories help London’s Air Ambulance Charity with case studies to help with their continual research and fundraising. These studies illustrate the reason for the air ambulance’s existence and how lucky we are to them. There are so many people who previously may well not have survived, have been given the chance to rebuild their lives and return to their families.

Founded in 1989, the Duke of Cambridge became Patron of London’s Air Ambulance Charity’s 30th anniversary campaign which aims to highlight the charity’s vital work across the capital.

Common Causes Of Falls In The Elderly And Getting Up From A Fall
How and when to remove a motorcycle helmet following an accident
Winner BizzieBaby Gold Award for Burns, Falls and Emergency Calls